>>The short film must have been completed After 1st January 2017.
>>Entries MUST be PAL format only. NTSC is NOT accepted. The DVDs must be in .MP4 or .MOV format. The Festival Management will not be responsible if film is not screened due to problem with the DVD.
>>The film can be Documentary, Experimental, Narrative, Fiction, Nonfiction, Music Video or Animation. The original film may be produced on 35 mm, 16 mm, HD, DIGI BETA, BETA SP, U-MATIC, DV, DVD, but the film must be available on DVD presentation or preview purpose.
>>Total running time must be less than 30 minutes in length, including front and back credits. There is no minimum running time.
>>The language of film can be in Hindi, English, Punjabi, Haryanvi, Bengali, Bhojpuri, Kumauni or Garhwali.
>>Censor Certificate is not mandatory but NOC is required.

>>Multiple entries can be submitted, but with separate entry forms, preview DVD, synopsis/description/Poster, should be enclosed. Each film is considered as a new entry.
>>IFF 2019 organization has right to use the entries / send / selected / nominated films, DVD and materials from the film for Festival promotional purposes and to retain DVD copies of each film as part of our festival library.
>>Films once selected & submitted for final screening will not be allowed to be withdrawn under any circumstances until festival is over.
>>The publicity material (Promo, Trailer, Brochure , Stills, Poster, etc.) and a synopsis of the short film to be enclosed with the entry. Entry materials submitted shall not be returned to the entrant.
>>Transportation and insurance costs of DVDs, related documents, photographs and publicity materials from the country of origin to the Festival Office shall be borne by the applicant.
>>The Festival will not pay any custom duty or registration to the Custom department at the Indian aviation authority; if the parcel is returned to the applicant because of that the festival organization will not be held liable for any such circumstances.

By Cash deposit or Demand Draft or Cheque, or Money Transfer in favor of ..

>>Film should be submitted before deadline. The Indogma Film Festival is not responsible for late, lost, damaged, misdirected, postage due, stolen, or misappropriated entries.
>>Entry Forms with incorrect / inadequate / illegible / ambiguous/ incomplete particulars will not be considered. The festival committee reserves the right to accept or refuse any film without assigning any reason whatsoever.
>>DVDs submitted for selection will be considered as final and no changes will be entertained after submission. It is the sole responsibility of the applicant to submit DVDs without any physical / quality defects.
>>The competition is open for professionals as well as students. No separate section for student filmmakers (25% fee discount, ID card necessary).
Selection

>>Winners are selected by a judging panel of industry professionals consisting of independent producers, production companies, filmmakers, and other film industry professionals who may be substituted at the discretion of the Festival organizers.
>>All films are judged equally based on:
Content Originality (Quality of story-line, and script)
Production (Camera work, lighting, and shot composition)
Post-Production (Editing, transitions, pacing, continuity, and flow)
Image (Focus, color, and lighting)
Sound Quality (Clarity, consistency of audio levels, and lack of noise)
>>No work or artist will be either discriminated or favored by their country of origin, language, age, race, education, gender, ideology, or by their economic resources. Every content, every form, every technique will be admitted with no censorship of any kind.
The decision of selection committee is final and no correspondence will be entered into Finalists will be notified by mail and/or email. The Indogma Film Festival 2019 will use its best efforts to announce the selected films, winners at the designated time, but will not be held liable for any unforeseen delays.
>>By entering the Indogma Film Festival 2019, contestants and/or their parents or legal guardian (if such entrant is a minor) agree to accept and be bound by the decisions of the Festival and its judges which are final and binding in all matters.
>>Selection of films for Indogma Film Festival 2019 will be done by a committee whose decision will be final. However, Festival Authorities reserve the right to accept or reject any film that is likely to offend sentiments, feelings or sensibilities of any caste, community, religion and sector is likely to promote racism or ill will in the society.
>>The Festival Authorities will have the right to screen (maximum 2-5 screening) in different cities of India on non-commercial basis. For promotional / publicity purposes, excerpts from any film entered in the festival may be shown on any Television network / Internet or related media during the festival period.
>>Entrant agrees to be bound by all terms of these official Festival rules and regulations as established herein. The Indogma Short Film Festival reserves the right to extend the Festival deadline for any unforeseen reasons if needed. Entry constitutes permission to use winner’s name, likeness, and voice for future advertising and publicity purposes without additional compensation

LEAGAL IMPLICATIONS
Short films/ Documentary/ Music Video/ Animation that are submitted must be the entrants’ original work and shall not infringe on any copyrights or any other rights of any third parties. 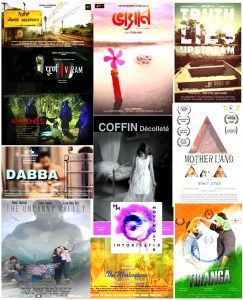